Old Theletra was abandoned as a result of a huge earthquake that caused a great landslide estimated to have occurred circa mid seventies, as villagers fled their homes and set up a new base higher on the hills.
Many household goods have been left behind, evidence of just how quickly people fled the area. There are old clothes still hanging on living room hooks, glass coca cola bottles, tins of canned food, old chairs and just about anything imaginable.
The younger generation are renovating their old properties and breathing new life into an area that has been left abandoned in time.The village commands spectacular views across a wild undulating landscape.
Back 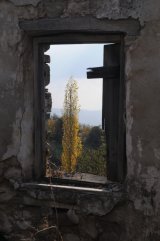